Umbria is mainly composed by hills, between 300 and 500 mt on the sea level. The highest peaks are near the Marche borders, on the eastern side of the region. This area is named Appennino Umbro-Marchigiano. The highest peak is Monte Vettore, 2,478 mts high. Other important mountains are Monte Subasio near Assisi, Monte Nerone near Città di Castello, both higher than 1500 mt. The main river is the Tiber, that runs from north to south. This river has several artificial dams, such as the Corbara Lake (between Todi and Orvieto) and more south the WWF Park of Alviano. Other important rivers are Velino and Nera, near Terni: the water jump of the Velino river onto the Nera river makes the beautiful Marmore Water Falls, 168 mt high, which is the highest water falls in Europe. The main lake in Umbria is the Trasimeno Lake.

The Umbrian cuisine offers many interesting traditional dishes, starting from the great Norcia tradition (pork meat products, truffles, home made pasta such as umbricelli). Other typical specialties in Umbria are roasted meat, such as chicken, duck. Moreover a great product to try is the white focaccia. The Umbrian menu is basically about meat but in the Valnerina area fish is well known, too (trout). Excellent wines are in Umbria, such as Orvieto DOC, the Montefalco Red, the Sagrantino and Sangiovese. Other great products are the Castelluccio di Norcia lentils, the farro and Cascia saffron and the Perugia chocolate production. Umbrian artisans mainly produce ceramics (Deruta), wood and leather. It is still very popular the Ireland lace and the tulle making traditions.

Umbria is a region which has often been associated to spirituality and religion, that’s why most traditional festivals are dedicated to a religious subject. The main religious festivals are: San Francesco d’Assisi, Santa Rita da Cascia and San Benedetto da Norcia, or the Corpus Domini celebration in Orvieto. Other interesting events are: Le Gaite in Bevagna, Eurochocolate in Perugia, Slow Food in Orvieto, Cantine Aperte in Montefalco (for wine and food lovers). Moreover: Umbria Jazz Winter and Summer (in Orvieto and Perugia), Trasimeno Blues, Festival dei due Mondi in Spoleto, San Valentine’s Day in Terni, Palio dei Terzieri in Città della Pieve, Calendimaggio in Assisi, Corsa dei Ceri in Gubbio. 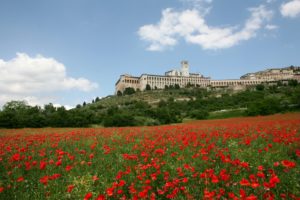 ASSISI – Laying on a Mount Subasio side, everything in this small town talks about Saint Francesco. The stunning Basilica, also famous for its Giotto’s frescoes, is located at the top of a charming hill, facing the whole Perugia valley. Just outside the center of the town you can find interesting roman ruins to visit. A gentle quiet atmosphere reigns in this town, which was an Umbrian town then conquered by the Romans and afterwards devastated during the Barbarian invasions. Later it became a free city-state and during the Renaissance Assisi was ruled by many lords before becoming part of the Pope state. Besides the basilica, there are several interesting churches: S.Rufino, S.Damiano and S.Chiara. Distances > Gubbio (45 km – 27,9 miles), Perugia (10 km – 6,2 miles), Terni (70 km – 43 miles), Orvieto (70 km- 43 miles), Todi (50 km – 31 miles), Spoleto (45 km – 28 miles), Foligno (25 km – 15,5 miles). 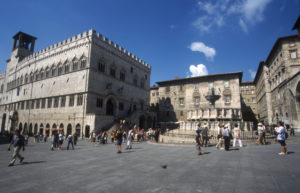 PERUGIA – Perugia is the main Umbrian city, made of its five districts enclosed by original twenty-two Centuries old Etruscan walls. The most important monuments and spots in Perugia are: Palazzo dei Priori, the Cathedral, Fontana Maggiore. All these monuments can be found in the same place: Piazza Grande. Walking down the beautiful Corso Vannucci, there are several locations to see, such as the Belvedere Garden, the Rocca Paolina and the Umbrian Art Gallery. While eating some excellent Perugia chocolate, be ready to walk up and down the hill because stairs are another distinctive feature who makes Perugia famous! Distances > Rome (180 km – 111 miles), Florence (150 km – 93 miles), Terni (60 km – 37 miles), Orvieto (66 km – 40,9 miles), Todi (40 km – 24,8 miles), Assisi (10 km – 6,2 miles) Gubbio (50 km – 31 miles).

GUBBIO – This is the perfect example of a Medieval city, surrounded by a wild savage nature and high mountains. Gubbio still maintains a mystic atmosphere. Its main monument, Palazzo dei Consoli, is another example of the old Umbrian architecture. Just out of town there are some interesting Roman ruins to be visited: the old theater and other particular Roman trails and streets. Gubbio is also World famous for its giant candles race: an old traditional folk event. North-east direction and in a few minutes you can find the natural area of Montecucco. A large savage park rich of untouched woods, rivers and some very long underground paths (more than 30 natural caves are in this area). Distances > Rome (210 km – 130 miles), Terni (118 km – 73 miles), Orvieto (113 km – 70 miles), Citta di Castello (54 km – 33 miles), Perugia (50 km – 30 miles), Cortona (70 km – 43 miles), Arezzo (100 km – 62 miles), Siena (150 km – 93 miles). 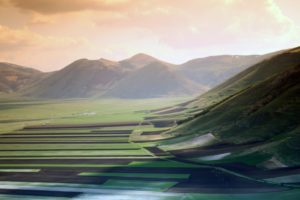 NORCIA – Among the most important Umbrian towns, Norcia is a unique place characterized by its central square where the S. Benedetto Basilique and the Town Hall are. Not so far from the town there is Castelluccio di Norcia, an almost deserted small borough, located up on the Sibillini Mountains National Park. This area is very famous for its lentils production (June is amazing for visiting) and for its altitude (1432 mt on the sea level): this is the reason why the borough has a nickname: “the roof of Umbria”. In Castelluccio di Norcia a climbing course can be taken. Sports lovers can find another attraction near Norcia, the rafting center on the Corno stream. Norcia is also famous for its cooking tradition and its precious black truffles. Distances > Rome (160 km – 99 miles), Perugia (110 km – 68 miles), Assisi (90 km – 65 miles), Ascoli Piceno (60 km – 37 miles), Terni (65 km – 40 miles), Gubbio (130 km – 80,6 miles), Spoleto (50 km – 30 miles) 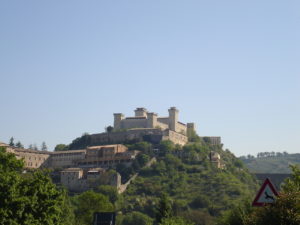 SPOLETO – This town represents a typical mix of many different ages and events. Previously rebuilt by the Romans, it still keeps its old Medieval aspect. Spoleto was a rich Longobard area, then an important town of the Pope State The Rocca Albornoziana and the Roman ruins must be seen ! Since a long time, Spoleto has been the set for an important cultural event, called “Festival dei Due Mondi”. Other important monuments that are worth a visit are the Cathedral of S.Maria Assunta, S.Pietro church and the Roman theater dated First Century A.D. Today it is totally restored so that its original structure and shape are still visible. Distances > Terni (30 km – 18,6 miles), Perugia (65 km – 40 miles), Assisi (70 km – 42 miles), Cascia and Norcia (45-50 km – 32 miles), Orvieto (80 km – 49 miles), Rome (140 km – 86 miles).

FOLIGNO and the Clitunno’s Springs – Famous since ancient ages, Clitunno’s springs are a spectacular series of several water bubbles making a suggestive little lake. Near the lake you can find a nice small temple dedicated to the god Saturno. Close to the Clitunno’s springs there are some interesting towns like Foligno, Trevi, Bevagna, Spello and Montefalco. All of these towns have the typical Umbrian features with hill position and fascinating white-stone built palaces. Walking around these Umbrian boroughs is a unique experience, in fact they all have mantained the old atmosphere of the past ages. 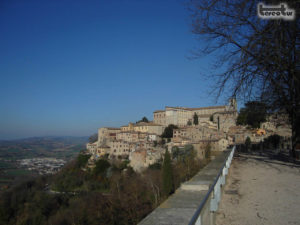 TODI – The town is World wide famous mainly for the kind of stone which is made of and also because it gave birth to the poet Iacopone da Todi. Visiting Todi also gives you a chance to taste its typical food and products. Its historical downtown is very pretty, starting from the Santuario della Consolazione through the San Donato church, until the great Piazza del Popolo. A visit to this town is of great interest for the beauty of its monuments and its Medieval center. The nature surrounding the historic downtown is rich, full of great landscapes and panoramic view. In ten minutes from Todi you can easily reach the Tiber Park and the Corbara Lake (dam over the Tiber river). Distances > Orvieto (30 km – 18,6 miles), Assisi (55 km – 34 miles), Perugia (50 km – 31 miles), Terni ( 40 km – 24,8 miles), Spoleto (42 km – 25 miles), Gubbio (80 km – 50 miles), Rome (139 km – 86 miles), Florence (197 km – 122 miles).

ORVIETO – The famous rock of Orvieto is just the basis of a city where everything is about art and history. Ages come across the town starting from the Etruscan civilization, through the Middle Age, until today. Since then, time has not been able to damage the wild beauty of the red volcanic rock plateau (which Orvieto is made of) but it testifies about its supreme art and beauty. Putting together the famous Duomo, Saint Patrick’s Well, Moro Clock Tower and many other artistic treasures, you easily get a unique glance over the Orvieto masterpiece.
Around Orvieto, in any of its areas, both Tuscany and Lazio directions, you can reach many historical attractions, such as the Crocifisso del Tufo Etruscan Necropolis, the Roman ruins over the Tiber (Pagliano’s Roman harbor) and Giulio’s bridge (Roman architecture near the Paglia river). Distances > Rome (110 km – 68 miles), Florence (149 km – 92 miles), Perugia (66 km – 41 miles), Terni (75 km – 46,5 miles), Siena (120 km – 74 miles) Assisi (70 km – 43 miles), Todi (30 km – 18,6 miles), Bolsena (20 km – 12 miles), Viterbo (45 km – 27,9 miles).

TERNI – Marmore Water Falls – Once you get to Terni, keep going on towards Valnerina. Suddenly, only after 7 km, you will find on your right side the impressive and amazing Marmore Water Falls, the highest falls in Europe, 165 mt high. This fall was artificially created by the Romans, to supply their water needs. Terni is a dynamic city, one of the most modern ones in Umbria, anyway beside its industrial fame, it is also rich of monuments and interesting archaeological areas. In fact not far from the city, there are two different but great attractions: one is the famous archaeological site of Carsulae, while in the near town of Avigliano Umbro, you can enjoy a restful excursion in the prehistoric Dunarobba Forest. The city itself offers a nice historic downtown, and just out of the city, there is the famous San Valentino Cathedral. Distances > Rome (90 km – 55 miles), Florence (220 km – 136 miles), Perugia (60 km – 37 miles), Orvieto (75 km – 46 miles), Todi (60 km – 37 miles).

ALVIANO & its WWF Oasis – Very close to the small town of Alviano, famous for its perfectly maintained castle, you can find the WWF Oasis, created in 1963, by building a dike on the Tiber River. Soon, because of its shallow water, a weird and particular mixed ecosystem came out, full of swamps, lakes and fluvial forests. In this area you can birdwatch and have guided tours. In 1978, the Alviano Oasis became a protected area and from 1990 it is managed and kept by WWF.

FICULLE – Medieval town, famous for its terracotta productions. Very close to the town you can find Castello della Sala, which was a Monaldeschi family country property and World wide famous today as an Antinori family winery. Ficulle is a nice borough famous for its typical pottery. North bound, towards Monteleone d’Orvieto and Montegabbione, you reach an old Medieval outpost, sited in a strategic position on the way to Perugia, called Montegabbione. A visit to Montegiove Rock with the castle and to Thirteenth Century Franciscan Scarzuola Convent are definitely worth it. Tommaso Buzzi built this convent. Now it is a sort of fairytale city: a suggestive and unique theatric scene. 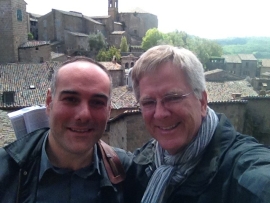 Find out more or adjust your settings.

This website uses cookies so that we can provide you with the best user experience possible. Cookie information is stored in your browser and performs functions such as recognising you when you return to our website and helping our team to understand which sections of the website you find most interesting and useful. You can adjust all of your cookie settings by navigating the tabs on the left hand side.

Strictly Necessary Cookie should be enabled at all times so that we can save your preferences for cookie settings.

If you disable this cookie, we will not be able to save your preferences. This means that every time you visit this website you will need to enable or disable cookies again.